I picked up this sirloin in the grocery on sale, it was a little over 3 lbs. for $5. I never have cooked one before so I researched and didn’t find much other than it’s very lean without a lot of flavor. Decided that it needed as much help as possible and it definitely needed marinating.

It came in a net so I took it out and rinsed it off to see what I had to work with. It was actually 2 pieces that were symmetrical in shape, now let’s get on to the rub.

Mix all ingredients in a bowl and make a slurry, rub pork and marinate in the fridge overnight or longer. It fit easily in a 1 gallon bag allowing me to turn it over a few times. If you don’t have all the ingredients no worries, it mostly needs salt, sugar and a little heat like cayenne pepper.

Since it came in a net I decided to bundle both pieces back together with butchers twine. Not the best job but it held, I need to go watch that Jacques Pepin video again. 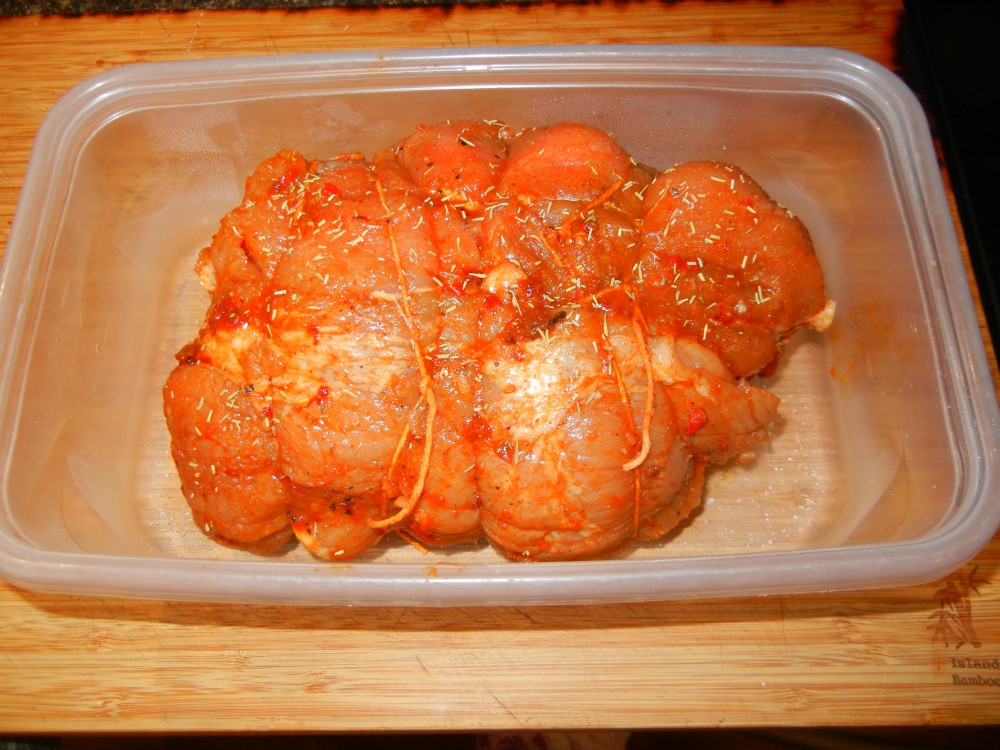 I decided it needed some smoke flavor and put it on the grill (indirect heat) with some hickory wood. It also needed some color so I let the grill run up to 400 degrees F and placed the pork away from the flame directly under the smokestack. Closed the lid and let it cook until the fire was out (about 1 hour).  Then I placed it on some sliced onions and put into a 225 degree F oven to finish (about 2 hours).

DO NOT overcook it! That’s the key, I watched this like a hawk and pulled it when the internal temp was 145 F. Let it rest tinted with foil for 10 minutes or longer the temp will go up while it rest. Slice and serve with potatoes and a green, it went really well with a potato pancake the next day.